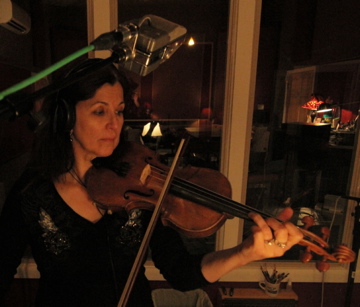 Flavia Cerviño-Wood studied classical violin at the Conservatory of Music in Santiago and at the Universidad Católica de Chile. Early in her career she moved to Brazil to join the band Grupo Agua, which toured South America and performed and recorded with Milton Nascimento. Her first work in the United States was with the Brockport Symphony in New York before moving to San Francisco where she was active in the Latin music scene. She is a featured soloist with Sol y Luna along with Rebecca Mauleon and Michael Spiro.  She is active in the improvised music scene, having performed with Cecil Taylor and his orchestra at the San Francisco Jazz Festival and a composition by John Cage with the Merce Cunningham Dance Company. She currently performs with Red Rock Rondo (who won 2 Emmy awards in 2010), blue haiku, the The Emily Merrell Band, Diamond Empire Band, The Phillip Kuehn Orchestra and the Salt Lake Symphony. Flavia holds a BA in Music from San Francisco State University and a Masters in Social Work from the University of Utah.